Every week, when I greet my grandmother, she beams. “I thought I’d never see you again,” she cries, and then she hugs me like we’re reuniting after World War II. For all I know, she thinks we are.

I pick Nana up every Sunday and we go out for coffee and a walk, around a park or a garden or a beach. She inquires politely about how “you live around here, don’t you?” – I don’t – on the well-being of “all your children,” – I have one, all grown up – and how my cats are doing – I have none.

I just bought her Elizabeth Arden makeup this week. Ceramide Ultra lipstick in 03 Flame, and Flawless Finish sponge-on foundation in 40 Beige. She’s not completely sure who I am, but she won’t leave the care facility without “putting my face on.”

I wonder what last vestige of myself I will cling to when I’m on my way to having been.

I wish I could share a photo of her. I wish I could tell you about her life. But she can’t give consent. She wouldn’t understand what I was asking. Is it enough to tell you she was born in 1926 (the same year as Marilyn Monroe). That she was “allowed” to stay at school until she was fourteen, despite the objections of the rest of her family complaining all that education was “wasted on a girl.” In another life – the life I got to have – she wanted to be an architect.

For all our differences – and boy, howdy, there were more than a few – she always supported me in my educational goals. Admittedly, she was incredibly disappointed I didn’t become a lawyer. A lawyer, to her, was the epitome of attainment.

Just after Christmas the nurse from the care home phoned. Every Sunday, after I left, Nana worked herself into a lather, because other people had family who took them out, and no one visited her, ever. No one loved her. And she would cry, heartbroken, because she was all alone in the world.

To her, this is completely true. Imagine knowing in your heart, that no one has ever been to see you – that you’re locked away, you’re not allowed to leave, and you’ve been abandoned. And you know this is true because you would remember if they had, and you remember nothing.

The nurse suggested I start a journal and write down the dates when I visit. It was a great idea, I just wasn’t sure if Nana would read the entries. If they’d mean anything.

I knew Polaroid had gone bankrupt twice in the 2000’s but I also knew they’d recovered, and I figured they must be making something like a digital instant camera by now. What I found was even better. 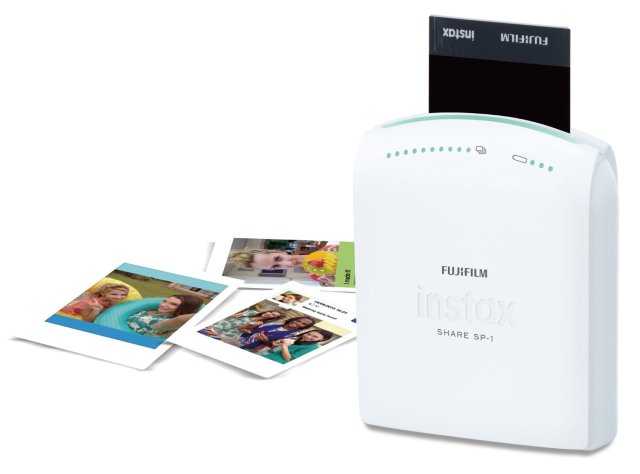 It has its own app, for iOS and Android. It fits in a handbag. I can simply take a pic on my phone, open the app, push a button, and print out my photo. If I want I can edit and add a filter. Now every Sunday I take selfies of me and Nana together and then stick them straight into her journal (finally, a practical use for washi!) and write about what we are doing that day. She loves having her photo taken. She automatically makes a model pose: shoulders square, hips angled, head tilted to catch the light.

It’s brilliant. When Nana gets upset after I’ve gone, or during the week, the nurses pull out her journal and read to her, and show her the photos. I put a photo of me in the front of the book, next to one of me when I was eight, and my name, and photos of all the other grandchildren. They live far away now, but to her they’re small children who still might pop round after school for a piece of ginger crunch, or her legendary home-made ice cream and chocolate sauce.  And she might not know who I am, but she knows we still love her.

This is what technology promised us; that it would solve problems. Make life better. Bring us closer.