I am wearing Sneakers of Humiliation. They’re like the Cone of Shame, but for my feet. They tell the world that I did not understand the dangers of walking in flat, unsupportive shoes, and now I have tendonitis.

My key attribute for footwear has always been, “If aliens invaded, right this second, could I run away from the disintegration ray in these shoes?”

The woman at 1:12 is wearing the wrong shoes.

For years I had to wear – well, I felt I had to wear – heels to work. Nothing crazy, just a moderate three inch pump. I walked between campus buildings, I walked up hills (much easier than walking down hills), and I never got tendonitis. When I left I started wearing my ‘Do Not Give Me Shit Because I Do Not Wish To Take Your Shit’ Doc Martens. They made my feet happy. They also gave me the ability to kick a plague-carrying rat to death, should that ever be required. They definitely never gave me tendonitis. 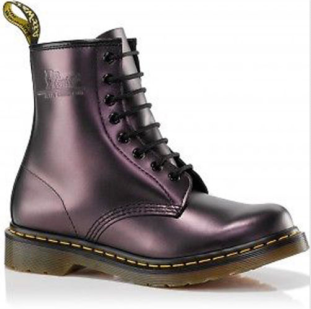 I never actually owned these metallic purple ones. I added them to my wishlist but I never bought them, and I still have a grudge against myself for it.

However, since May, I have been wearing light, flat-as-a-pancake loafers and spending my lunch break ambling around the leafy residential neighborhood that surrounds my workpace, and now I can’t walk without saying, “Ow.” Or, more frequently, “Goddamn it all to hell.” 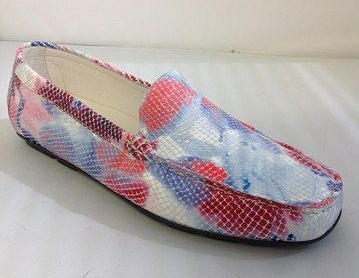 Look at them! They’re harmless. Flat are safe, right? Flats are on the side of the light! But apparently walking in unstructured flats is a well-known cause of tendonitis. This was unwelcome news to me.

My physio told me that to stop my agony I needed to buy this specific kind of Brooks walking shoe. I obeyed her, and now I hate myself. I’m wearing these to work, you understand. With real clothes. In public. Daily.

I know objectively there is nothing wrong with these shoes. I know people choose to wear them of their own accord. But I hate them. They don’t look as bad in the photo as they do on me. On me they look really, really bad. I have a high instep, and a wide foot (thank you so much, younger me, for refusing to wear shoes until you hit high school /sarcasm). I feel like I’m wearing a Spanish Boot.

Spanish Boot. The bell is for extra-value shaming.

They bring a small sliver of misery to my mornings. I’ve only owned them four days. Why could I not be forced to wear these Brooks running shoes?

I don’t particularly care for pink, but apparently these were “inspired by the clouds and designed to feel like running in a meadow toward the one you love.” Hear that? Clouds. Meadow. Loved one. A distinct lack of black polyeurethane and ignominy.

I’m going to get better, make a pile of my loafers, and sacrifice them in billowing flames. Then I’m going to wear nothing but boots for the rest of my life. And look! While googling Spanish Boot I found these.

To wear them I merely require the aliens to invade, and then I join a rag-tag band of resistance fighters and wage an underground war to – sucessfully, natch – take back the planet. Ok, yes, there will be collateral damage, but I will get to wear the boots!

6 thoughts on “Sneakers of Humiliation”