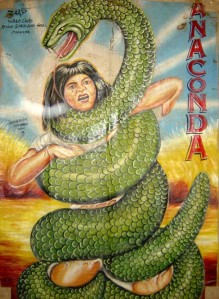 This is a real movie poster for Jennifer Lopez’s 1997 masterwork, Anaconda. It was produced in Ghana, where right up to the end of the 1990s Ghanese artists painted fantastic movie posters for the local release of block-buster films. 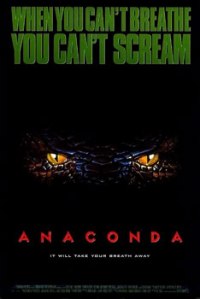 This is the original theatrical release poster.

Ok, sure, it’s slick, it’s well designed, but it lacks the raw power and verve and sheer crazy joy of the top version, right? The Ghanese film posters are a kind of outsider art; what French artist Jean Dubuffet defined as “art created outside the boundaries of official culture.”

With the news that graphic designer Natasha Snow, who did the cover for Arroyo, is bringing her exceptional talent to Dreamspinner Press, it’s time for me to ‘fess up. Much as I love Natasha’s work, I deeply, truly, adore naive covers.

For a long time M/M Romance has been an outsider genre, that’s now sticking its foot into the door of mainstream. But the best of the worst of the m/m covers reflect a deep passion for the genre, a raw enthusiasm that shines brightly, through even the worst photoshopping. They, too, are outsider art. 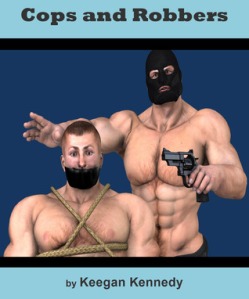 Keegan Kennedy has been putting photos of tastefully naked males on his latest covers, but I never would have discovered his particular brand of delicious kidnapping and domination if it wasn’t for the cover of Cops and Robbers. It’s corny, right? But there’s this solid visual centre to the image, bounded by the lighter lines at top and bottom, that’s incredibly effective at producing a sense of mass and power. The paleness of the central figures make really interesting negative shapes on that blankness – that absence – that is the background. This cover tells you everything you need to know about the book. 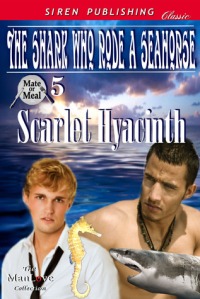 Or there’s this one, from Siren, by Scarlet Hyacinth; The Shark Who Rode a Seahorse. The cover designer rejects the slipperiness of abstract linguistic signifiers – untrusting that we will grok sharkteethwaterroughskinbloodpain from a scant combination of thin lines in a system originated to count grain debt in Mesopotamia 5,000 years ago – and takes a belt and braces approach by adding photos of . . . a shark and a seahorse. It’s a cover Magritte would have made, if he were into hot gay shifter sex (and I’m taking a punt here, but I bet he never tried reading hot gay shifter sex. His loss). 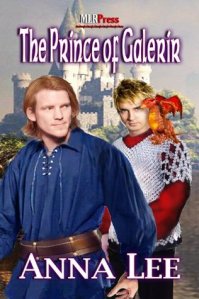 MLR Press produced this cover, for Anna Lee’s The Prince of Galerir. There’s something very poignant about it, that speaks about the lack of diversity in mainstream media. When the designer wanted these visual elements, nothing was directly source-able as stock images from Shutterstock etc. So they’ve created this melange – a collage of disparate elements that have been cobbled together to show us the world the author wants to immerse us in. It’s like Richard Hamilton’s What Makes Today’s Homes So Different, So Appealing, but in reverse. 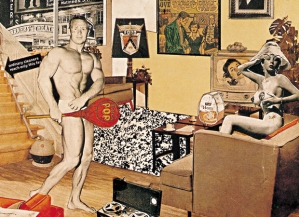 Instead of Hamilton’s collated images – the ones that surround us, bombard us, create us – it’s images that our hearts might yearn for, but don’t exist; the world we want, but can never have. (Yeah, yeah, do not try and tell me you don’t want a tiny dragonet on your shoulder, because you will be a lying liar who lies.)

With m/m going (relatively) mainstream, and the maturing of the e-book market, I think we’re about to lose this era of photoshopped hair extensions and six different fonts in five different colours. Yes, the books will look as slick and edible as Japanese menus, but I will treasure the last sips of outsider design while I’ve got them.

Do you have an overlooked gem of a naive cover, for which you feel genuine affection?

For more on outsider artists, try Raw Creation by John Maizels, and also this excellent podcast (from 18:35) on the classic outsider artist Henry Darger (only listen if you are in tip-top emotional shape: Darger was placed by his father in a Chicago asylum aged 12 for, you guessed it, being gay.)

I also recommend the book Extreme Canvas on the outsider movie posters created in Ghana in the 1980s and 1990s. Arnold has never looked so good. 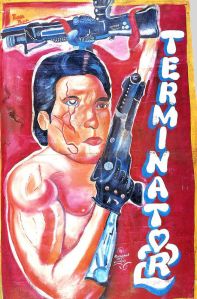 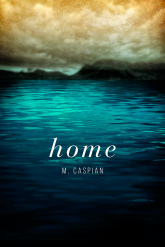